Travelling South For The Winter

After some final packing, organizing and training including advanced first aid training at the British Antarctic Survey(BAS) Girton Conference and media training from some of the BBCs radio producers/presenters and writers it was time to head south.

Video Media Training - Hadrians Wall Northumberia UK
BAS Cambridge saw everyone meet just before 4pm (GMT) on the Saturday 1st November to travel down to Heathrow to catch the plane to Christchurch one of the Eastern gateways to Antarctica. We arrived in plenty time as the weather turned to rain. 9:30pm we boarded the first flight for the leg to Singapore which took about 12 hours, from there was a short stop over while the aircraft refueled for the leg to Sydney Australia and another 10 hours of sitting. 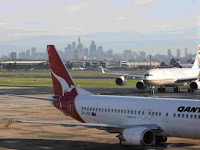 Sydney Airport while on route
Finally a short flight of 2 ½ hours from Sydney to reach Christchurch in New Zealand. A total journey time of 35 hours with stops plus a 13 hour time difference (4pm Saturday 1st Nov – 4pm Monday 3rd Nov), so one well confused body clock. Not so confused as not to have dinner at Dux Lux a very nice bar restaurant we found last time we traveled via Christchurch below is one of the many artworks we discovered around Christchurch (with our Principle scientist posing he is Italian so I guess it figures!)

Art installation near Dux Lux Christchurch New Zealand
Tuesday was spent getting over the jet lag and visiting the NSF offices at the airport to get inoculated against the southern hemisphere flue. Also we were kitted out with clothing for the flight down to Antarctica.

One of the gang of 4 kitting out in USAP - ECW (Extreme Cold Weather
Wednesday morning at 5.20am we caught a shuttle bus from our hotel up to the Raytheon/NSF offices near the airport. We changed into our Antarctic clothing and boarded the USAP C17 for the 5 and a bit hour flight to McMurdo. The weather was fine so the plane got in at its first attempt.