Now this is not the end. It is not even the beginning of the end. But it is, perhaps, the end of the beginning. Preparation continued in earnest with the surveying of the runways at Williams Field. As with everything McMurdian, bureaucracy reigned for 2 days as we searched out those who could give permission and those who would be able to actually install the system onto their vehicle and carry out the survey. Finally after an endless quest we tracked down Marty well at least a Marty unfortunately the wrong one the correct one was in an all day meeting. The Quest continued into the second day and Marty was located and Jason the Challenger driver of the vehicle that is used to groom the runway was contacted. Early in the morning a survey GPS was attached onto the groomer and the first surveying (ground) of the AGAP season was undertaken. For over a day the GPS collected data as the Williams Field runways were accurately surveyed, this data will be used to compare against and calibrate the aircraft sensors. 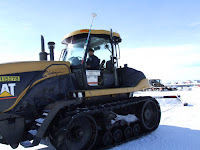 Runway Survey
Mean while back in Rothera the British Antarctic Survey Otters arrive and were worked on around the clock to allow them to be ready to continue onwards to McMurdo for the survey Otter and AGAP for the utility Otter. We will come back to the progress of these red Twin Otters in the next few days. 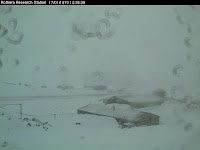 Rothera Station - A faint outline of a Twin Otter can be just be made out
As Thanksgiving approached on the McMurdo base the BAS survey team did a shift in the kitchens in the preparation for coming banquette. Turkeys were stuffed, potatoes were sorted according to size so they would bake correctly, yogurt made and the other festive trims not entirely familiar to the British helpers were prepared. Anticipation is growing here at McMurdo as people wait for the Thanksgiving meal and some well earned rest, but on the BAS side we are anticipating working in order to get ready for test flying and departure to the Pole and the acclimatisation camp. To support the departure of the survey team to the acclimatisation camp, logistics and the shipping of the survey spares and base stations is been organized over the next few days.
Posted by Carl at 08:01