After the short ride from Pegasus airfield to the McMurdo base we were ushered inside building 155 the main communal building on the base. Here we were given introductory talks on safety and base familiarisation, after that there was a more specific presentation for the science projects. Then we had just enough time to grab our bed linen, rescue our bags and find our rooms.
The following day (Thursday) was spent getting familiarised with the base with base tours, lab familiarisation and settling in to our lab space to begin some work.

McMurdo - (Click to get a better view)
Friday and Saturday was spent doing snow school (aka happy camper), this was great fun as the vast majority of the time was spent out in the snow towards Williams field just beyond Scott Base the New Zealand base. During the day we learnt to build various types of shelters in the snow including a quincy which basically means burying all the bags and packing snow over them before extracting them and then tunnelling in to the void left by the bags. We also made snow trenches which many of us slept in overnight, though -11°C outside it sort of warmed up inside the snow trench once inside a sleeping bag. As well as the building of snow shelters and wind breaks from snow blocks we cooked our own dinner for the night a delightful choice of dried meals. 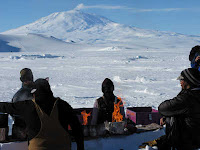 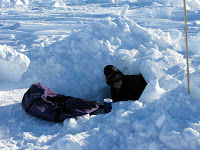 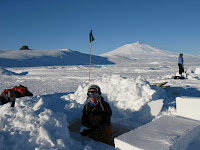 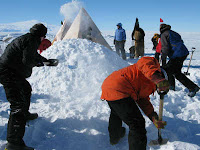 The following day on the Saturday we broke camp and prepared cargo lines ready for collection. The rest of the morning was spent doing various scenarios including white out searches and emergency situations. We then returned to base to watch a few educational films. In the evening after dinner we had chance to watch some of the films from the Banff mountain film festival which was quite a good watch.

The coming week will involve getting our cargo in order for install and onward shipping to South Pole.
Posted by Carl at 03:17