With the anticipated arrival of the Twin Otter next week the team have started to unpack the boxes and test various field equipment and science equipment that will be installed onto the aircraft. The aircraft cabin heater system that we had developed in house at BAS performed well during initial testing on the sea ice at William Field, though some initial repair work had to be carried out to remedy the damage sustained in transportation. Also we set up a weather fax that will allow our pilots to make calls on the survey lines that can be flown that day to avoid areas of bad weather thus maximising our ability to go survey flying. 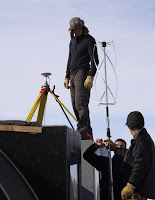 Installation of weather fax
Our gravity specialist has spent the last week carrying out test on the gravimeter and checking its correct operations before it is installed into the aircraft.

Gravimeter been setup and tested
Likewise our radar expert has been creating the configuration files required to get the best out the system when we will be flying over the Dome A region. As well as testing the equipment the underlying logistics for the program has also continued including flight planning, onward shipping of spares and the NSF logistics that enables this project to progress.

Sunday a rest day at the base in McMurdo allowed us time to do one of the trails that have been created around McMurdo. The one we chose to do was the Castle Rock loop trail which sets off from McMurdo and heads up towards Arrival Heights before heading off across the glacier towards Castle Rock. The walking was not too strenuous but been able to see miles out in front through such clear air makes things appear closer than they are so you get the impression that it is taking longer than it should to walk the distance. So after about an hour and half trudging across the glacier we reached the base of Castle Rock, unfortunately the rock is closed for climbing so we were unable to climb to the top to admire the view. The views from the ridge were quite spectacular looking down onto the frozen Ross sea, though it was a bit overcast so Mount Erebus was obscured from view, I guess we will hopefully make it back round the loop on a clear day and see Erebus as it is meant to be the best location to view it from. We continued down the glacier towards the ice shelf with the clouds chasing us, from there it was a long hike along the ice road toward the base. All in all it was a good walk taking about 3 hours 40 minutes.

Castle Rock
The previous weekend we visited the historical hut at Cape Evans, this was interesting to see all the historical food, tools and items the likes of Scott and Shackleton used on their Antarctic Expeditions. There was box after box of Fry’s coco they drank some but some was used to cut up icebergs to allow the ships to escape the sea ice. The coco been dark heated up and melted through the ice eventual cutting the iceberg it to bits. Along with the coco was seal meat and penguins eggs they collected to eat, these day because of the Antarctic treaty we no longer eat the local populous but the food prepared in the kitchens by the chefs. Hanging on the wall of the hut was Oates bicycle in need of much repair, cannot imagine riding on a bike there in the early 1900s today though with all the machinery there are some hard compacted ice roads which you see the odd cyclist on. The hut used sea weed as insulation so after the short walk up to the cross commemorating the people lost on the early expeditions it was quite warm and welcoming inside.

Provisions in hut
On the way back we stopped at the ice caves formed in the ice tongue from Erebus. After negotiating the ice bridge that passed the melt water pool we slide down the ice slide into the cave. Once inside the cave the light was diffused to a blue light and the temperature was icy cold. As there was a mix of sea water ice and fresh water ice, ice crystals grew on the walls forming amazing structures and patterns.

Ice cave blue light
Team spirits are high and with anticipated arrival of FBL the survey aircraft from Rothera where it has just flown into; there is excitement in the air and an eagerness to get the science equipment installed and the show on the road. The team even had time to partake in the traditional skirt party held at Scott Base.
Posted by Carl at 10:00